So the reason I am in NYC was to be part of a special audience for the filming of the Dr. Oz 100th episode.  The audience was comprised of 100 people who've lost 100lbs or more.  I mean a conglomeration of people who've done something just awesome...there were a lot of folks there who were just tremendous (none of which I can talk about until the show airs next Tuesday (2/16).  In addition to the audience, there were several people featured with Dr. Oz, but the stories I heard from speaking with other folks in the audience...super inspirational. I was in tears a few times... 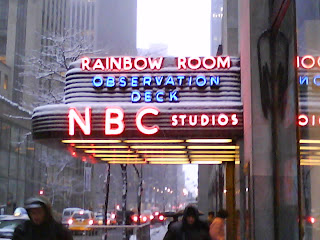 One of the themes I heard over and over (and here I thought I was *special* hahah ;) - "I lost the weight and then I became a

And if not an outright change in career...maybe that's why there are so many blogs (like this! "baaahhhhhh" I'm a sheep!) out there...like me wanting to share these things as I continue to experience them, and as the journey moves forward the things I am able to set out to do that I never would have had the ability to do before, the things I'd have been too AFRAID to do before.  I just want people to know the power of what they have inside of them, to just trust just once to push through the fear one more time and amazing things can follow.

There's an amazing thing or two inside of all of us.
Posted by Cathy Cox at 4:48 PM

Cathy Cox
Sofa plonker turned fitness enthusiast, 100+lbs lost. Now powerlifter, blogger & personal trainer at Bloom-Fitness.com, trying to share the power of changing your life! I started out on one extreme and I've been to the other…now I'm trying to get that pendulum to swing a little less wildly. This blog documents my training and continued journey toward healthy, happy living. Onward, with everything I got!