ShopNBC - the Run Down

So I'm back from the crazy trip to Minnesota for my first TV appearance - Guest Host for eDiets Meal Delivery on ShopNBC (this was show #2).

Travel out to MN went fairly smoothly and I met some GFs from eDiets for dinner that night. Girls night out in MN! Hah..can't find one of those here, but send me to Minnesota...lol. I had met Nancy once before 3 years ago (seriously that long?!) and Pratima once just about 2 years ago. Karen I hadn't yet met although we had spoken on the phone - what a wonderful person, so genuine and beautiful :) We had a really nice time! 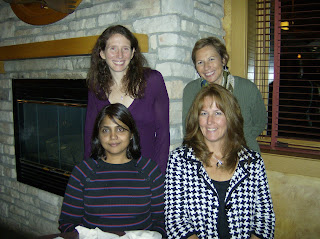 Tuesday was over to the mall to get a manicure just in case there were any hand close-ups! I started getting a headache in the salon, not sure if it was triggered by the smell in there, but it certainly wasn't helped by all that. Then over to ShopNBC for training...I met with their legal team to get briefed on can/can't say and then I met with the first Host I'd be working with the next day. We sort of went through the show flow, but a lot of it wasn't finalized still. Despite things still being up in the air, it did make me feel a bit better. The headache was getting worse, took a bunch of excedrin migraine and I ate a zone bar hoping maybe I was just hungry and that would help. I met up with Kim and the food stylist and the food was looking fabulous, and then we found Connie who had just finished HER meeting with legal.

We made it back to the hotel around 6 and met up with Gina then went off to dinner. The headache was continuing to worsen, food was obviously not the issue. We went back to the hotel to do "wardrobe." Connie volunteered to try to massage the headache out of me...which I gratefully accepted. It felt better for a bit but that relief didn't last. Around 2am I was in agony and had already taken well over the limit of excedrin migraine for a 24 hour period in about 12 hours, so I went downstairs to see what other drugs were available. I paid a small fortune for some advil and tylenol and popped 3 of each. That took the edge off enough to let me sleep a few more hours.

Was up early and had a solid breakfast, and then Kim and I left for the studios at 7:30 and met with Rob, our make-up and hair guy for 8am. Once my hair and make-up were mostly done, they found me a quiet room with a day bed in it and I laid down in there until about an hour before the show just trying to stay still and keep the head under control. The other girls were in hair/make-up during that time. When I finally had to get up, I downed another cocktail of excedrin migraine, tylenol AND advil and got dressed. About 30 minutes before the show Rob did hair/make-up touch-ups and "gave me lips" LOL

Sound guys came around about 20 minutes before the show to hook us all up. Had a few moments with Lynne (the host) and a pep-talk from Kim and then it was all kinds of lights, camera, action! GAAAAAAAH!

The rest is history! I did my best, and I think each time I went on I improved a little over the last. After the first show we got some lunch (much needed) and then I went and just laid down in my hotel room (with more drugs) until we had to get back to the studios.

I got some hair extensions for the 2nd show - check 'em out: 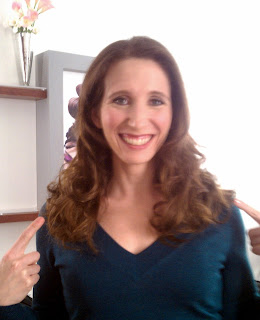 After that, I went back to bed.  Kim came in and gave me another hit of the drugs and I stayed quiet a bit longer, before going back to change into my evening outfit and get more "lips" :)  I was FINALLY starting to feel better!  Met with the next host briefly, and the next thing I know we were all getting mic'd up again and then BOOM - ON!

Connie and Gina were fabulous for their parts - some nerves showed through for all of us.  We also had some fabulous call-ins from other eDiets members who are currently on or have been on our program - Holly, Victoria and Brooke took their turns on Wednesday and they totally rocked it.

When it was over we got some feedback from the producer and then we changed and cut out of there - back to dinner and the hotel room.  Early call time on Thursday.

More of the same on Thursday, I felt like the Thursday show went the smoothest, at least form my point of view.  Maybe that's because I was feeling a lot better.  We had Tina call in that day and Connie and Gina were even better.

When it was all over - what a relief/release!  Here we are, all dolled up and DONE: 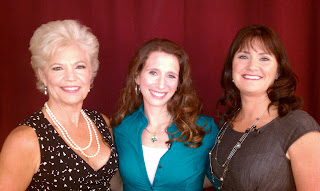 Kim and I were off to the airport.  I had a bajillion travel delays and issues, but ultimately - when i got home I couldn't have been happier.  Took the day off today (for the most part, a few hours from home this morning) - no training, nada.  I napped.  I was exhausted.

Thoughts on food to follow.
Posted by Cathy Cox at 5:35 PM

Email ThisBlogThis!Share to TwitterShare to FacebookShare to Pinterest
Labels: work

Cathy Cox
Sofa plonker turned fitness enthusiast, 100+lbs lost. Now powerlifter, blogger & personal trainer at Bloom-Fitness.com, trying to share the power of changing your life! I started out on one extreme and I've been to the other…now I'm trying to get that pendulum to swing a little less wildly. This blog documents my training and continued journey toward healthy, happy living. Onward, with everything I got!